Find out how 100 Ecuadorian little people may hold the key to the cancer cure.

For at least the last 50 years, scientists around the world have devoted themselves to finding a cure for cancer. Cancer is one of the greatest threats facing the world today, and yet there is no known end-all cure for the problem. Most cancer treatments either excise the tumors or simply attempt to slow down the spread. But what if there was a cancer cure? What if doctors could administer a drug or compound that reversed the effects of cancer and cured patients once and for all? Perhaps a few small villages in Ecuador holds the answer to the problem. Journey with us for a moment.

Dr. Jaime Guevara-Aguirre has spent the last three decades studying the Ecuadorian little people with Laron Syndrome, and he has made some interesting discoveries:

One study examined the effects of Laron Syndrome on mice, and discovered that the mice lived up to 50% longer than their counterparts. Not only that, but they contracted many fewer diseases. 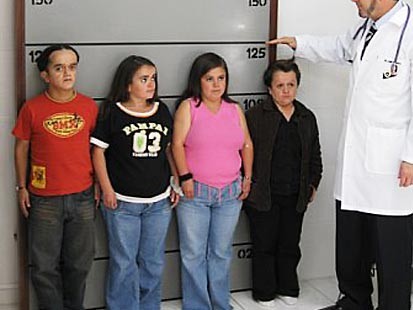 Only 350 people in the world have been diagnosed with Laron Syndrome, and all of them are descendants of the same ancestor–the person who introduced the mutated gene millennia ago. Most of the people with Laron Syndrome live in remote parts of Ecuador, though there are a few living in Spain.

Laron Syndrome is not quite the same as dwarfism. Those with Laron have the growth hormone, but there is a defect in the growth hormone receptor in the liver. This defect stops their bodies from producing insulin-like growth factor 1, or IGF-1. Without this IGF-1, their bodies do not grow. However, the lack of growth may be a good thing, as there is no out-of-control cellular growth–the kind associated with cancer. Not only that, but the lack of IGF-1 makes the bodies of these little people highly sensitive to insulin, ruling out any risk of diabetes.

Doctors are trying to determine if giving the patients with Laron Syndrome IGF-1 treatments will reverse the condition and allow for growth. However, this will also give them a chance to study whether or not the lack of IGF-1 could somehow protect the body against diseases and cancer. If so, it may bring to light new theories on cancer treatments.

Note: People with Laron Syndrome are not necessarily “healthier” than the average person. While they may not be at risk for “normal” diseases, they are more likely to suffer from epilepsy and seizure disorders, or are prone to accidents. Could there be a cure for cancer to come from this unusual, highly rare genetic disorder? Perhaps discovering why this important growth hormone contributes to the formation of cancer and other diseases will allow scientists to understand the causes of these diseases. It may be one more piece to the jigsaw puzzle that is the human body.