Your sushi is just as healthy as it is tasty… check out the great health benefits of salmon skin:

We all know that salmon is one of the healthiest foods around. It’s an amazing source of protein, loaded with Omega-3 fatty acids, and rich in minerals. Basically, salmon is the healthiest of the proteins, especially when you consider just how natural it is.

But what about the skin? Should you be eating the skin as well, or should you do what you do with chicken skin and get rid of it? You might be surprised to learn that the skin can be a pleasant addition to your meals…

All About Salmon Skin

Salmon skin is often removed and thrown away, but did you know that it’s loaded with fat? The fatty acids in salmon skin are similar to those in chicken skin, so overdoing it on the skin is not the best idea for your heart. However, considering that you probably don’t eat a whole lot of salmon (thanks to its high cost), you don’t really have to worry about the effects of the skin on your diet. It will add a bit of fat to your diet, but not enough that it’s a serious cause for concern.

Also, remember that fish contains a good deal of fat, but most of that fat is GOOD for you. The Omega-3 fatty acids in salmon are also present in the skin of the salmon, so eating the skin will be just as good for your health as the rest of the salmon is. It may take a while to get used to the flavor of the skin, but it’s a healthy addition to the meal

Note: There is one caveat to the “healthy salmon skin” concept. When fish are exposed to toxins and pollutants in the ocean, those toxins are absorbed primarily into the fatty tissues of their bodies. Considering that their skin is mostly fat, it’s safe to assume that the skin may contain a lot of toxins. The reason the skin is often removed is to reduce your risk of toxin or heavy metal exposure. However, there has been no research that proves conclusively that salmon skin can be dangerous, so it’s safe to consume in moderation. 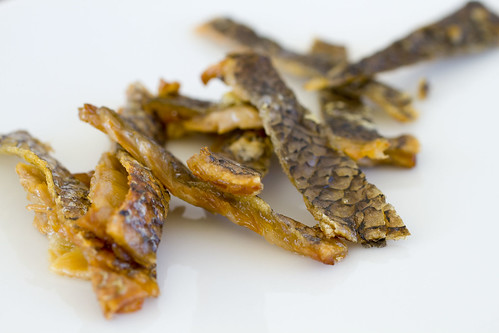 If you are going to eat the skin, it’s important to prepare it properly. There are many ways to make the skin delicious, such as:

But if you’re going to cook salmon with the skin on, it’s a good idea to look for fish that is as safe as possible. You want to avoid exposure to toxins, pollutants, and heavy metals. In order to do that, you should look for smaller salmon. Smaller fish have not lived as long, and thus they have not been exposed to the same quantity of heavy metals and toxins as older fish. You should also look for cold-water salmon, such as those caught off the coast of Scandinavia or Canada. These fish have the lowest exposure to dangerous toxins, and thus are the safest for you to consume–skin and all!