With the streets strewn with grey snow and black slush, ’tis the season to watch some dance ( INSIDE) this winter.Â  Here are my picks, totally worth braving the cold for:

Association of Performing Arts Presenters happens next weekend in New York City and there are performances of dance, music, theater, musicals, and opera all over the city. Some of these performances, called showcases are either free or very low-cost.

Shameless plug: I will be showcasing my latest project at Dance New Amsterdam, 280 Broadway – entrance at Chambers St, 2nd floor on Jan. 8, 2010 at 9 pm. The showcases at Dance New Amsterdam are free for the public but limited seating so get there a little earlier. (http://www.dnadance.org/site/performances/apap-2010/friday-1810/)

Among the notable performances I watched this past fall season so far has been Netta Yerushalmy’s Room without a View and Kota Yamazaki’s Rays of Space at Danspace Project. Danspace Project is known for cutting-edge programming.
Rooms without a view was punctuated by the clear marking of three separate living chambers, perhaps depicting the close living quarters of New York City apartments and the different people that live in it. The audience was seated around these three “chambers” and it felt like you were looking in a fishbowl. There were six performers and were broken up into three couples. There was the “Power couple”, “Sleeping/Sex-ing couple”, and the “Roommates or Oblivious couple”. Each couple performed series of movements that marked a pattern of their lives. Ms Yerushalmy and her performers created the worlds that each couple has created. The “Power Couple” had movements that were angular, marked with strong holds and lifts, as well as a struggle to keep up with one another. The costumes of business casual button-downs and dark pants were very fitting for them. The performers were also very well suited to each other with their long languid arms and tall lanky legs. Yerushalmy often plays with the audience focus by introducing the characters one at a time and punctuated with interruptions in between because life does not stand still while others are in focus. She does this cleverly by having constant movement within each “chamber” instead of frigid, frozen poses. The “Sleeping/Sex-ing couple” awakes slowly as if the last nights’ romp in the bed causes them to sleep in. Their movements are characterized by intertwined limbs, hip thrusting, hip circling, close proximity, crazy lifts that seamlessly transition to the next, and you guessed it “lovemaking”. However not pornographic in any sense because this is an all-ages show after all. Most children would not understand the complexities of their lifts and hip thrusts, they would just merely giggle because the two performers who danced these roles were very comedic. The set in their “chamber” consisted of pillows, blankets, and a small gas stove. After their phrase was done, the female performer took out pieces of bacon and started cooking the bacon which was left to sizzle and cook until the end of the performance. The wafting scent of bacon led to funny memories of first love, one night stands, and drunken college nights that didn’t end until the next morning. The last couple’s story was a little more confusing to decipher because I wasn’t sure whether they were lovers on their way out of a relationship and grown distant or just roommates that didn’t care about each other’s lives. The male performer was engrossed on his computer for a majority of the time while the female character kept repeating a series of pained expressions, and drops to the ground. Overall, Rooms without a view was highly entertaining and even the most infrequent dance goer can enjoy this work.

Rays of Space by Japanese artist Kota Yamazaki was an interesting contrast due to his minimalist approach. His “set” consisted of special lighting that was the brainchild of French set designer CÃ©cile Pitois. The program notes left a lot of open interpretation to the piece. “Light = invisible waves/invisible energy”, “Body radiating Chi energy” – fragmentary words by Yamanazaki. The sound score subtle and barely audible in the beginning of the piece. The movement had a twitching, rolling, sensory experience to it that was similar to taking a bikram yoga class that was somewhere in between physicality, heat, flexibility, and meditation. This went on for a majority of the piece until a change in the music marked by a jarring sound changed the course of the piece to take on a more animalistic, bird-esque, and child play. It was quite puzzling for me. Most of the piece had the performers acknowledging each other, the space, but not to the audience. The only time the performers acknowledged the audience was at the very end of the piece where all five performers walked towards the audience as the lights went out. The simplicity in this dramatic effect seemed to provide a satisfying end to an evening of a body meditations. 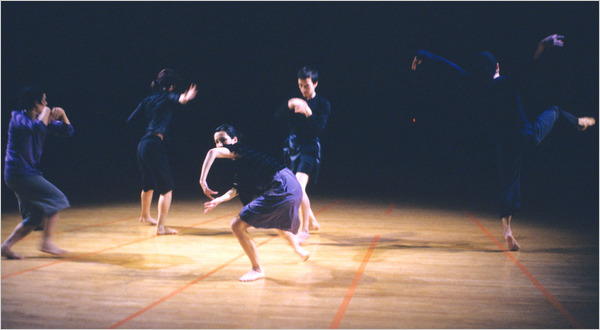 Press tickets were obtained from Danspace project in exchange for these reviews.