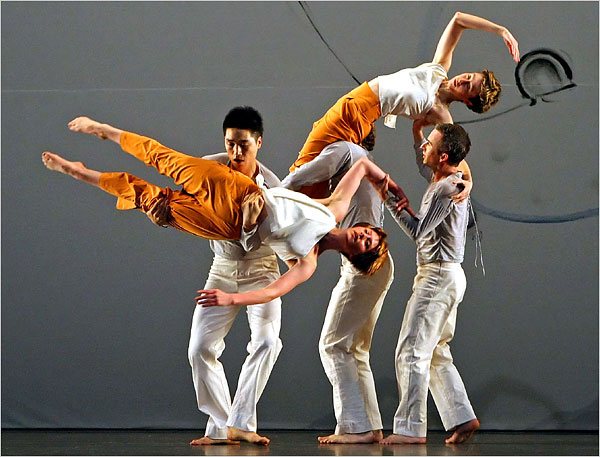 If there’s one thing certain, attend opening nights of live performances (if you can). The performance energy of the performers is infectious and there might be a reception (read: wine, beer, and munchies) afterwards. You might even bump shoulders with the amazing and iconic Trisha Brown herself. I went to the Trisha Brown Dance Company’s season performance at BAM on Wednesday (opening night) and saw four pieces performed by members of her company and guest performers from the Paris Opera Ballet.

For those who are dance aficionados, Trisha Brown was a founding member of the revolutionary Judson Church Theater with Yvonne Rainer, Steve Paxton, Lucinda Childs, Alex and Deborah Hay, James Waring,Â  Carolee Schneeman, Judith and Robert Dunn, David Gordon, and Elaine Summers, and more. Having studied from Simone Forti during my years at UCLA and performed Yvonne Rainer’s work at the Getty Museum in Los Angeles. I feel an intense connection of the hippy-dippy-patchouli-and lavender kind with the folks from this revolutionary period known simply as the Judson church era among dancer folk. These folks were the first people to strip the complexities of modern dance and include daily life as part of their dance-making thus postmodern dance was born. (A 2-second dance history lesson: Modern dance was a reaction to the rigid nature of ballet and rejected codified form)

The show opened up with Planes, a piece that was created in 1968, with a startling wall of that is symmetrically dotted with holes in which the 3 dancers would climb up and down and across in a slow fashion with many pauses and careful placing of hands, foot, legs, with the occasional arm swing that seemed to happen just so audiences will remember that it is still a dance and not just watching a performance of wall climbing. If you can remember (or clicked on the links above), Brown came from the school of thought that dance can be anything and anyone can dance. Planes is a perfect example that beauty in movement can come in all forms. To keep our attention to the performance at hand for a fairly long period of time, the wall had projections of a film by Jud Yalkut. The images portrayed on the screen were of city scapes juxtaposed with an image of a solo figure leaning back with arms outstretched, or a singular baby crawling, at least thats what struck out the most interesting for me because it created movement for the dancers climbing the wall. As if the images in the film were the foreground and the dancers were the background. The minimalist sound score was created by Simone Forti; my teacher at UCLA (mentioned above).

The next piece was a little jarring in the respect that it was three principal ballet dancers from the Paris Opera Ballet in a pas de trois (two men and one female dancing together). O zlotozony/ O composite had the dancers in all white cosutmes designed by Elizabeth Cannon. The backdrop by Vilja Celmins is a beautiful scene of the night sky with stars adorning the white scrim. Aurelie Dupont, the female dancer, was gracious in her movement in the respect that she appeared at ease and humble in her approaches to every single arabesque, arm sweep, and lift. A striking moment that was the most beautiful yet unexpected happened when the two male dancers were doing simultaneous solos, it involved rolling and arching of the back and torso in and out of the ground while Ms. Dupont waits patiently with her back to the audience while the men repeated their phrases with athleticism and vigor. The lighting by Jennifer Tipton for this piece was subtle yet phenomenal. Ms. Dupont interchanged during this piece from barefeet, soft ballet slippers, to pointe shoes without the audience noticing too much. Alastair Macauley (NY Times dance critic) noted this too in his review of the performance. (http://www.nytimes.com/2009/05/01/arts/dance/01tris.html?_r=1&ref=dance) Overall this was a beautiful ballet that Brown choreographed on these fine french dancers.

Glacial Decoy was performed by an all female cast from Trisha’s company and was a cunning interplay of interweaving patterns. The entire piece was to silence but the dancers were attuned to dancing their own music. The movement was very bouncy/flouncy and almost child-like. A dancer would emerge from the curtains to do a short solo phrase and then without batting an eye would leave the stage and another dancer from the other side of the stage would emerge. This happens for a while and then suddenly three dancers emerged and one leaves the stage whilst the other two continue moving in near perfect synchronity at times and at other times seem to be finishing each other’s movement as if one were finishing a sentence that another person said. Swinging motions of the arms and legs in a very relaxed manner on top of the short little bounces to punctuate movement were apparent throughout the entire piece. The set design and costuming by Robert Rauschendberg assisted in the understanding of the piece. The images portrayed in the background were projected onto 4 panels. The images were played in a loop and were rearranged in a different order every few seconds. The dancers wore white semi-transparent nightgowns that moved well with the type of movement in this piece.

L’Amour au theatre, is a new work and my favorite of all the pieces that were showcased. The movement was lush, full of energy, musically satisfying, and there was a sense that the performers really enjoyed this piece. There were subtle moments of comic relief and many moments of swirly motion. The background set by Trisha Brown herself is an abstract art of swirls, an ambiguous smiling face, and dots. The dancers seemed to be embodying the painting behind them. The women were dressed in orange/gold high waisted pants and white fitted tank tops with a billowing cascade of fabric on one side was worth noting. The costumes were stunning onstage. The men lifted the women, the women lifted the men in series of lifts that were snake-like in pattern and continued to explore the spaces between each crevice of the human body with effortless abandon. The airy feeling and quickfooted lightness was prevalant during this piece. It was like watching live moving scultpures float in and out of spaces with intention and strength. The shapes were shape shifting but very clear. A beautiful moment happened when five dancers were in a horizontal line and two of the dancers were “swinging” their legs in a back and forth fashion while the other three supported them with their arms; to me this looked like a lot of fun and something that made many audience members smile. The only that bothered me was the choice of music, after a while, I knew when a new section was coming and when that section would end by the sound score.

After the performance, Trisha Brown came onstage for a bow and the whole theater rose to their feet and gave her a standing ovation.

I attended the reception held at the BAM Cafe afterwards sponsored by the Cultural Services of the French Embassy in the US. The wine and cheese reception was classy and delicious. I left a bit tipsy from the wine but back in Manhattan before the clock struck 12.